Check out the book picks coming to the children’s library this September!

The Monarch Award is the Illinois K-3 Readers’ Choice Award. Book nominations are accepted statewide from school library media specialists, teachers, public librarians, and students.  Books are both fiction and non-fiction and include a range of interest and reading levels for students K-3. Come check out an Illinois Monarch Award winner today!

The Bluestem Award is the Illinois Readers’ Choice Award for Grades 3-5. Bluestem books are fiction and non-fiction , ranging interests and reading levels. Come check out a Bluestem Award book today!

Search for books to find the AR Level and points value. If the book is on this website, there is an AR test for it at your school!

TumbleBooks is a fun and interactive library of books available right at your fingertips. It allows you to read along with an animated book or read on your own. TumbleBooks are created by taking story books and adding animation, sound, music, and movement to create an e-book. Find picture books, chapter books, non-fiction, videos, and more for children of all ages on TumbleBooks today!

Kids InfoBits is a database perfect for primary and elementary school learners. It features information on topics such as health, sports, plants, science, and literature. Click the photo to access with either your Harrisburg District Library card number and 4-digit PIN, or using har16592

offers activities to improve math, reading, and art skills. Visit the classroom, the zoo, the farm, and more! Access is only available in-house at the library.

Ms. Emily’s Pick of the Month

Alfie: The Turtle That Disappeared by Thyra Heder

This book is available at our library.

Find out more about this book with this synopsis from Goodreads below.

Nia loves Alfie, her pet turtle. But he’s not very soft, he doesn’t do tricks, and he’s pretty quiet. Sometimes she forgets he’s even there! That is until the night before Nia’s seventh birthday, when Alfie disappears! Then, in an innovative switch in point of view, we hear Alfie’s side of the story. He didn’t leave Nia—he’s actually searching for the perfect birthday present for his dear friend. Can he find a gift and make it back in time for the big birthday party?

From the author-illustrator of Fraidyzoo and The Bear Report comes a warm and funny ode to friendship—even when the friends see the relationship, and the world, very differently.

Ms. Emily’s Pick of the Month 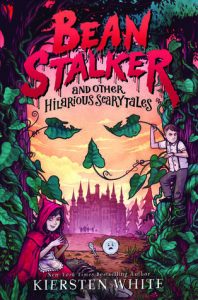 Beanstalker and Other Hilarious Scary Tales by Kiersten White

Check out the synopsis from Goodreads.

Once upon a time, a girl skipped into the forest and became a zombie.

Wait, no, that’s not how this story is supposed to go. Let’s try again.

Once upon a time, a boy did a horrible job as a sheep-sitter and burned his tongue on stolen pie.

No, children in these stories are always good and virtuous. From the top.

Once upon a time, a king and queen tried to find a princess for their son to marry, and he wound up fleeing from a group of very hairy vampires.

What about, once upon a time, a bunch of fairy tales got twisted around to be completely hilarious, a tiny bit icky, and delightfully spooky scarytales… in other words, exactly what fairy tales were meant to be. Grab some flaming torches, maybe don’t accept that bowl of pease porridge, and get ready for a wickedly fun ride with acclaimed author Kiersten White and fairy tales like you’ve never heard them before.

Ms. Krys’s Pick of the Month 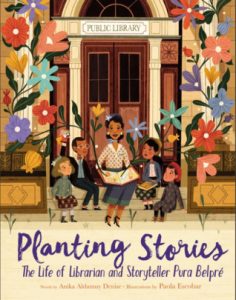 Find out more with this synopsis from Goodreads below.

When she came to America in 1921, Pura carried the cuentos folklóricos of her Puerto Rican homeland. Finding a new home at the New York Public Library as a bilingual assistant, she turned her popular stories into libros and spread story seeds across the land. Today, these seeds have grown into a lush landscape as generations of children and cuentistas continue to share her stories and celebrate Pura’s legacy.

This portrait of the influential librarian, author, and puppeteer reminds us of the power of storytelling and the extraordinary woman who opened doors and championed bilingual literature.

Ms. Lisa’s Pick of the Month 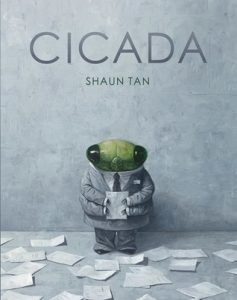 Check out the synopsis from Goodreads.

From the visionary Shaun Tan, an inspirational story for older picture book readers and beyond
Cicada tells the story of a hardworking little cicada who is completely unappreciated for what he does. But in the end, just when you think he’s given up, he makes a transformation into something ineffably beautiful. A metaphor for growing up? A bit of inspiration for the unappreciated striver in all of us? Yes, yes, and more.

Ms. Makenzie’s Pick of the Month 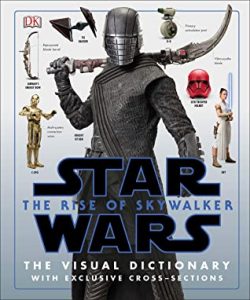 Star Wars: The Rise of Skywalker – The Visual Dictionary by Pablo Hidalgo

An authoritative companion to the climactic final chapter in the new Star Wars trilogy, this essential visual guide to Star Wars Episode IX explores the world of the movie in unparalleled detail.

Star Wars Episode IX Visual Dictionary features the fascinating characters, planets, vehicles, and aliens that the heroes of the Resistance will encounter in their battle to defeat the First Order. Produced in close collaboration with Lucasfilm, Star Wars Episode IX Visual Dictionary delves into the backgrounds of the new characters seen in the movie, as well as providing in-depth, updated character profiles of beloved Star Wars heroes, such as Rey, Poe, and Finn. The book also contains a handy visual recap of the events of Episodes VII and VIII, and stunning cross-section artworks of key vehicles!